Waking Up To Being Turned Into A Baby 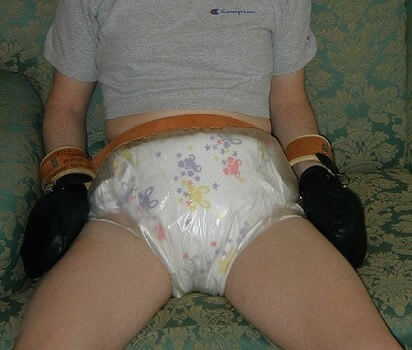 George slowly woke up, everything feeling fuzzy and off-balanced.  He blinked his eyes open, not quite sure what he was looking at, and raised his hand to rub at his eyes.  Tried to anyway, but something jerked it to a stop before it got past his hips. He pulled again and looked down to see his wrist held down by a leather strap with padding on the inside. His hand was covered in some kind of glove, blue with…. cartoon characters on it? There weren’t any individual fingers, just one big section that his entire hand fit inside of. A glance to the other side showed his other hand was in a similar glove, held down with another strap.  He started to panic a bit, jerking his arms what little he could, and it wasn’t until he started looking around for answers that he noticed the thin slats that surrounded him… it looked like he was in a crib! Right over his head was a baby mobile, which was what he didn’t understand what he was looking at when he first woke up. He noticed then that he was in an abdl onesie and had a diaper on underneath it.  He was tied down and diapered up, scared and confused about what was going on. Someone was forcing him to be a baby, some kind of forced age regression? He remembered his wife giving him something to drink and getting sleepy right afterwards… did she do this to him?!  Would you like for someone to force you to be a baby just like this? Call me for your age play phone sex and tell me everything!