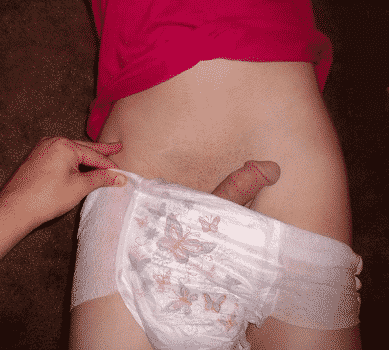 Mommy Tawny and I had a very interesting call with silly adult baby boy Johnny this week. She wrote a little bit about him, but I wanted to tell you the best part so she was nice enough to let me.  He told us all about a trip to the doctor that his Mommy took him on, and though he begged her not to make him do it, he was wearing a fluffy abdl diaper.  He even had to strip, taking off everything but his diaper for the doctor’s examination. They were there to talk about his continued accidents and the fact that his Mommy had to lay down the law about not touching himself in his diaper. His behavior had gotten better since she stopped him from doing that, he listened more and did what he was told without getting lippy, so she was happy about that. There was one tiny, itty-bitty problem, because since he wasn’t allowed to make cummies he had the worst case of blue balls! The pretty female doctor decided that it would be best to fix that particular problem right there and proceeded to untape his diaper so that the front of it flapped down between his thighs, exposing his dinky winky to the room. Before he could even try to fuss about what she was doing, her hand was cupping his balls! She squeezed and stroked them and he came almost immediately.  It had been so long since he had an orgasm, he never had chance of holding it back! She cleaned her hands off, taped his diaper back and patted it with a laugh, saying that she could tell he definitely hadn’t been touching himself, with how much cum shot out of him.  Do you think you’d last any longer than poor little Johnny? Call me for some naughty abdl phone sex and tell me everything.